That’s better!  The week didn’t fly by even tho it probably should have since I worked my two jobs and am quite tired today.  I hope ya’ll had a good productive week, full of accomplishments.  Seemed on my down time I just wanted to play Mahjong.  Ok, let’s get to the week’s Thankful Thursday post.

1.  Our washer has finally been fixed to satisfaction and things are good again lol  Now to get the bill….  The repairman did mention that the well pump was acting up so now I’ve made a call to the plumber and he’ll be out next week to check it out.  It’s always something, isn’t it?

2. Guess what?  My daughter who just stopped by my work last week stopped again and this time had her youngest son with her.  Guess he’s growing like a weed and needed new pants so they were on their way to do some shopping.  I love seeing my family 🙂

3.  A bit of a downer, rather than a highlight, but Snuggles hasn’t been seen in over a week.  It’s harvest time in our parts and I’m afraid she might have gotten run over.  OR – and this is probably a better story….she ran off to a neighbor’s and decided to stay there.  We haven’t had her very long, but we miss her 🙁

4.  Got paid a cute compliment by a traveler – a little old man and I think he was about 80 years old.  After I got done helping him with his questions, etc., he said he liked my freckles.  I thanked him but told him they’re moles and he told me to not ever ever get rid of them cos they look nice on me.   I’ve had them as long as I can remember; I’ve even grown to appreciate them cos they make me look unique.  I don’t think I’ll be getting rid of them any time soon lol 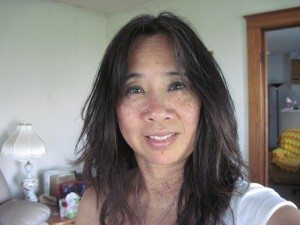 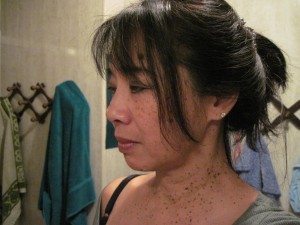 On the Fitness/Nutrition Front

5.  I’m still getting in my PiYo workouts but have been wanting to do something more and different so have been looking into hooping somewhat.  I don’t have all the information about this just yet, but I’ll be working on it over the next few weeks in what spare time I can find 🙂

6.  I was extra inspired this week and made a couple of our favorite meals that I haven’t in a while.  Homemade tacos – which I forgot to take photos of – and homemade spaghetti so we could use the rogue (volunteer) spaghetti squash from our garden.  That was so delicious.  We’ll be cooking a lot of squash this fall and winter.  It’s great just by itself.  The spaghetti meat sauce just enhanced the flavor that much more 🙂 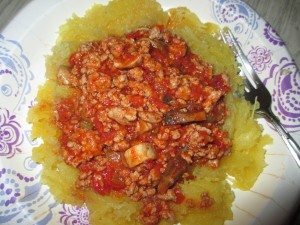 I also wanted to use the kale in our garden, (it’s still a little bitter) so  I made that one dish with fresh side pork and kale in oyster sauce.  This time I added some banana peppers and bell peppers and it added to the flavor of the already flavorful dish.  🙂  I forgot to take a picture of the finished dish which included the sauce 🙁  So this will have to do.