How is everyone this week?  This Thankful Thursday post brings me almost back to normal.  Not too much has happened since my mother-in-law’s passing, but that’s kinda good news.  I didn’t need any distractions while trying to get back to normal.

1.  This week has been mostly working and working out.  I had to work on the weekend and Mister stopped by on his way to go fishing after visiting his dad at the nursing home.  He came home with a nice catch of catfish 🙂

2.  Mid-week a traveler named Larry waltzed into the Center and asked, “What you got cookin’, good lookin’?”.  Made me smile.  🙂

3.  I mostly CIZEed it up on my days off for workouts and did do a couple Kathy Smith Power Walks.  I graduated to Level 2 of the dance routines and didn’t like it at first – they were harder and faster moves.  But the more I did them, the more I liked them.  I’m hoping that is the trend for the whole program.

4.  I was making a spaghetti meat sauce this week for supper but wasn’t paying attention and opened up a can of Mexican diced tomatoes (instead of plain old original diced tomatoes).  DUH!  But when you get served lemons, “make lemonade” they say.  Soooo…I cooked some jasmine rice instead of noodles and we had a new Mexican dish – Mexican meat sauce on rice instead of Italian spaghetti that nite.  It was really good too 🙂  I plan on making this ‘mistake’ again. 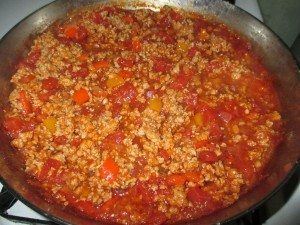