So another seven days just went whooshing by!  It’s Thankful Thursday again and my week has been a blur, which means this post will be short and sweet.

1.   I called in sick to work yesterday on my birthday.  Earlier in the week, I could feel the beginnings of cold/flu symptoms.  Mister has been fighting one for almost two weeks and I guess it finally got to me.  I’ve felt miserable the last few days but I’m determined to be over it within the week.  I’m claiming victory cos I don’t like being sick!  #goalsetting

2.  Another friend has unexpectedly died and it’s been so sad for his family.  Death is part of life, but wow!  When it happens around the holidays it’s much more difficult to deal with.  I know from personal experience when I lost my father right before Thankxgiving over 16 years ago.

3.  Traveler Tidbit of the week:  Angel from MI came in looking for a microwave to warm up his lunch.  I warmed it up and then he offered some of it to me.  I thought that was really nice of him, but I declined even tho it looked really good.  Then after he left I had to find the air freshener cos it was jumbo shrimp and the schmell was a bit overwhelming.

I’ve only worked out twice this past week.  One day I thought I could handle a short Country Heat workout, but I felt too too miserable to get er done.

Mister is such a wonderful husband.  He loves to make soup and made this wonderful concoction that made me feel what he intended.  He called it a healing soup. 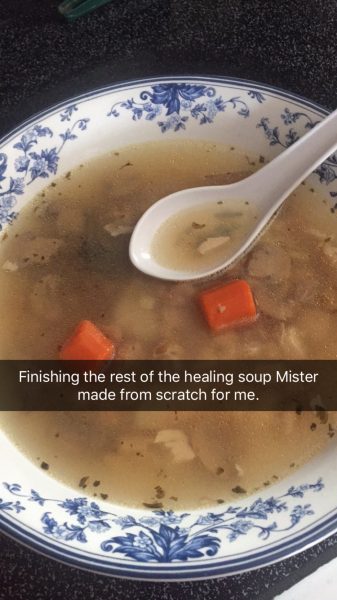