Another week has flown by and it’s a hot Thankful Thursday again.   Why does it go so fast when it seems nothing too exciting has happened?

1.  I’ve been fighting a poor internet connection for over a month now (more frustrating than exciting!) and this week it finally seems to be ‘fixed’.  There were adjustments made to the cable across our house and so far it’s been working really super!  Getting online tasks done quickly makes for getting more of other tasks done.  So I’m loving it!

2.  Other than that, it’s been work work work.  We are going camping this coming weekend – just for one nite.  But that is better than no nites! #somethingdifferentwillberefreshing

3.  Traveler Tidbit of the week 🙂  This has been a month of people asking me what background I come from or what nationality I am.   Graedon from Toronto and Mike from Hamilton, Canada both on two different days used the term ‘background’ when asking me about it.  Then JP from IL asked me my nationality and said I looked filipino and told me he had a filipino wife.  So did Al from OH.  Typically when it’s older American guys asking, the question “Was your husband in the military?” follows.  That must have been more common than I thought for so many to ask that.

I ordered Country Heat – the new line dancing Beachbody workout – today.  So I decided I’d better get ‘back into workout shape’ for when it arrives 🙂  I chose Kathy Smith’s half hour power walking dvd this morning to ease into it 😉

And…here’s another fine tasty meal we had one nite this week – baked chicken, sauteed sweet and snap peas from my sister in law’s vegetable garden, and salad 😀 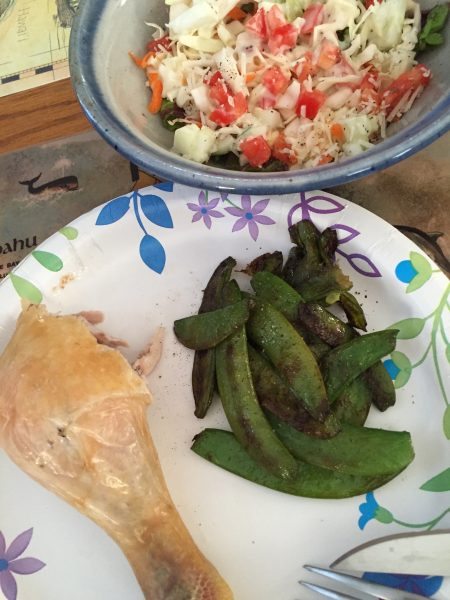