Today’s Thankful Thursday post is on Holy Thursday…it’s Holy Week and I haven’t even mentioned Lent this year.  It came early when we were in Hawaii and it just slipped my mind for highlights.   And now Easter is happening in a few days and I didn’t even bring out our decorative Easter basket.

1.  I finished that awful task called taxes – finally! When I went to make copies of my forms for 2016’s ledger, I found that my printer which I just hooked up in January won’t make copies.  What the heck????  It’ll scan and print, but won’t be the copier it’s supposed to be.  I was pretty bummed – new printer and all.  *insert cuss word*

2.  Mister came by and visited with me for quite awhile on his way to see his dad.  I loved it!  A few hours later, I came out from the back room when I heard the sliding doors open and who do I see but my oldest grandson on his way back to college.  We visited for about 10 minutes.  It really warmed my heart.  I’m so proud of him.  His 21st birthday is coming up and he’s planning on spending it studying for some critical exams he has to take the week after his birth date.

3.  Traveler tidbit for the week:  16 year old David signed the guestbook and I read it out loud… “Louieville KY”.  His dad laughed out loud and said, “You’re not from Kentucky!”  Seems he was born there and moved when he was 4 years old and they live in another state now.  But David insisted he’s from KY.  We all had a good laugh.

So over the last 3 days that I’ve been off work, you could say I’ve been making up for not doing official, regular workouts.  We’ve painted, cleared out and cleaned the 2-story farmhouse we are moving into.  (not done yet either!)  I painted for 7 hours on Tuesday and 4 yesterday, then cleaned for 3.  Today I cleaned for another 4 or 5 hours.  Been hitting the bed super sore all over each nite after eating a late supper and tonite will be the same.  I’ll be happy to go to work tomorrow just so I can “rest”.  haha

Here’s a couple photos of one of the rooms we primed and painted.  It was blue and now it’s oatmeal beige 🙂 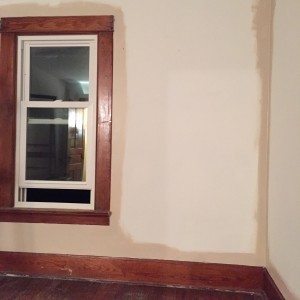 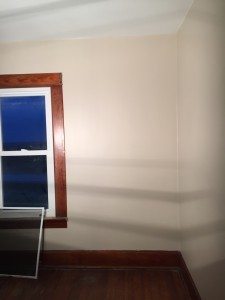 Ya’ll have a blessed Easter.