This Thankful Thursday post is short as half my week kind of went by in a blur.  I hope yours wasn’t so blurry.

1.  My father-in-law died so half the week was spent dealing with the tasks involved with all of that.  The meeting with the funeral director the day after went well.  A couple days later we had his visitation, and the funeral and luncheon the next day.

2.  Even tho the occasion was a sad one, it was great to see people I hadn’t seen for months and some for years.  It seems everyone is so busy anymore.  I heard variations of “We have to get together and party and not keep meeting like this” throughout the evening.

3.  It was actually good to get back to work and be in a “normal” routine the second half of the week  🙂

4.  I noticed the sun is setting earlier and it’s dark by 7 p.m.  This just stresses me becos in about a month, we will turn the clocks back.  This means I will be leaving work in the dark.  It’s fall and to me, it just means winter is coming.  🙁

5.  Traveler Tidbit of the week:  As Jim Morrison was signing the Guestbook at the Center, he said, “Don’t sell my name.  If you do, I get half.”  Then he gave me a big ol grin as I peeked to see what his signature was.

Ok, so I did a Country Heat workout a week after I sprained my foot cos it was feeling much better.  I modified the moves and everything.  Mistake.  That made it feel worse!   But now it’s almost 2 weeks since the sprain happened and my foot is almost feeling back to normal.  There’s only a teeny bit of wonkiness but I will wait for my days off next week to work out.  #beingwise

I was inspired by one of Autumn Calabrese’s recipes (she’s the Country Heat trainer) called Savory Turkey and Sweet Potato Hash.  I had veggies that needed to be used and a few things to be repurposed.  So I combined them with some eggs, then topped it off with my homemade salsa.  It was pretty “savory” if I say so myself  😉 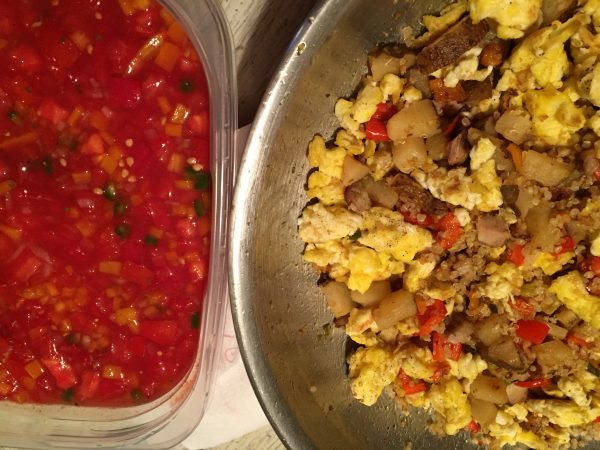