Healthy, from Scratch and Green

Healthy eating is always on my mind even if I don’t eat clean 100% of the time.  I look for an alternative way to make dishes I like that I’ve eaten in restaurants or purchased in the store and feel I can make just as well.  Since it’s been winter weather – aka soup weather – I wanted to do just that so I purchased some dried split peas and experimented with it (without a recipe or the help of google).  I followed the directions to cook it and ended up with a hot pot of boiled peas – which by no means was the soup I’ve had from a can.  So I thought I’d simmer it some more and kinda forgot about it as I was working on some other tasks.  I’m not sure how much later – maybe 10 or 15 minutes – I remembered the peas and went to check my pot.  Well, have you ever done something by accident and it turns out to be a really good thing?!  I found a healthy, from scratch and green soup!!  I seasoned it with some salt, pepper & garlic powder, added some bacon bits and WOW!  I was impressed!  lol  It was as good as the canned version, but with way less sodium in it….much healthier in my humble opinion. 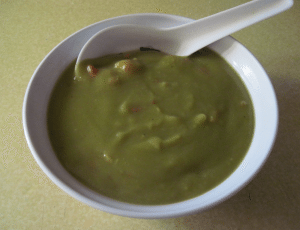