Here’s another food post for Asian cuisine lovers like moi involving my favorite – noodles 😀  I’ve always made Pad Thai from the box – where you get the rice noodles, the liquid sauce and then you add your meat, vegetables and nuts.  I decided to go one step further and make it from scratch – almost.  I say almost becos I purchased a bottle of Thai Kitchen Original Pad Thai sauce  instead of making it myself.  If anyone has a great recipe for the Pad Thai sauce and would like to share, I would appreciate it.  The rice noodles I used is the same used in this recipe.  I don’t know the “numbers/stats”, but I believe this is a healthy meal that also tastes great 🙂  So – here is my Pad Thai Made Easy:

First I soaked the rice noodles in hot water while I scrambled an egg in a little olive oil and set it aside.  Then I sauteed the vegetables (I used red pepper, broccoli, onion & zucchini) in a little olive oil and set that aside.  I stir-fried the shrimp in olive oil then combined the vegetables and shrimp, added the (drained) noodles and some bean sprouts and added the liquid sauce to coat the mixture.  After a couple minutes, I added the scrambled eggs, sprinkled the dish with some lime juice and crushed nuts (I used almonds) and it was better than the boxed stuff lol I sure hope you agree that this is Pad Thai Made Easy.  Bon Appetit! 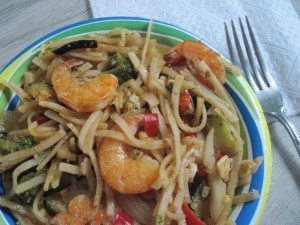 4 Responses to “Pad Thai Made Easy”